Today Tim Grance from NIST gave the keynote talk ”The Internet of Things and the Four Horsemen of the Apocalypse”, the four horsemen representing: cloud, mobile, social, and big data. If these technologies are the four horsemen of the apocalypse (symbolizing conquest, war, famine, and death, respectively in the book of Revelation in New Testament of the Bible) is maybe questionable. But it is clear that these technologies give very large attack surfaces that will be very hard to handle. Interesting to notice is that Internet of Things (IoT) is an estimated 9 trillion U.S. dollar business which should be contrasted against the wearable market that is estimated to be a 9 billion U.S. dollar market, Tim’s very clear conclusion is that even if the nine billion dollar wearable market is excluded from the overall IoT market, the IoT business would still be 9 trillion U.S. dollar. My conclusion from this talk is that Swedish industry and academia should target to take a large cut from this cake, this an area with a huge potential growth  for Swedish industry. So let’s go for this nine trillion U.S. dollar business!

This site uses Akismet to reduce spam. Learn how your comment data is processed. 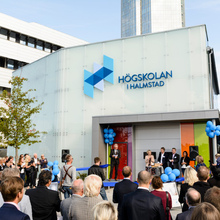